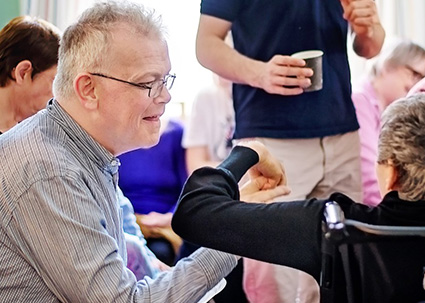 Richard Keagan Bull is a keen advocate for people like him, with learning disabilities. A member of L’Arche London (UK), he is also a member of the South Lambeth Partnership and Learning Disability England. Richard was recently awarded a Coronavirus Learning Disability and Autism Leaders Award by Dimensions in the UK. Below is an extract from the interview he gave about keeping connected, when he received his award.

We asked Richard, who lives in his own flat, supported by the community, how he has been looking after himself during lockdown. “I’ve been doing some paintings, I have, because I like paintings, I do.”

Richard has also been helping other people get through lockdown. “I’ve had a few meetings because I’m the Chair of the Forum for People with Learning Disabilities in London Borough of Lambeth (UK).”

“I’ve been putting messages on Facebook, just to talk to people and just to reassure people that we’re all in this together really. And it’s not just this country, it’s around the world it is. I think people have enjoyed these… someone said they thought my messages were better than the Prime Minister’s messages.”

Richard has also posted short videos encouraging people with disabilities to look after themselves. “I think the first one went to about 1000 people… A lot of people have been watching them. I do like being a spokesperson for people with learning difficulties. We need a voice so people can hear what we’ve got to say—it’s important.”