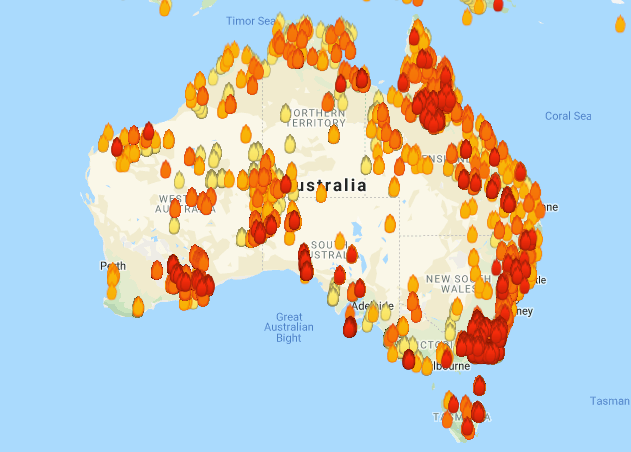 Our thanks go to everyone in the Federation for your thoughts and prayers as our land burns across Australia; this fire season pushes the devastation beyond 5m hectares, an area larger than many countries! The Internet and television communicate stories of destruction that are, I am afraid becoming depressingly familiar to us. At the time of writing, Australia has over 200 bush fires burning, the most serious fires are in the states of South Australia, Victoria and New South Wales.

Fortunately for our project in Perth, Western Australia, the bush fires are in the east and, while food supplies will be affected by the closure of roads and rail to the eastern states, our members’ daily lives are unaffected.

L’Arche has a project in Adelaide, South Australia, and there are 2 major areas of concern in this state. In Kangaroo Island, more than a third of the island has been burnt and there has been a major evacuation, either off the island or to one of two townships on the island. Two people have died with major stock and wildlife loss and damage to infrastructure. The fires are still burning. In the Adelaide Hills, there are two main fires still burning, at Cudlee Creek and Kersbrook, both North-East of Adelaide. Currently no threat to life, though one person died early last week. There was major loss to stock and property losses in this general area.

In Melbourne, Victoria the air quality is poor and it appears as if are Community members are safe. The air quality is very poor as the fires in regional Victoria drift to the city. In our newest project in Bendigo has also escaped the worst of the fires though they have poor air quality. The fires in Victoria have led to a loss of life, households, wildlife, livestock and communities.

In Canberra, Australian Capital Territory, the bushfires are very much front of mind here after several weeks of significant smoke haze (with air pollution levels significantly above the government’s « Hazardous » level). We have had to cancel the planned L’Arche coast holiday due to the fires on the south coast, which have also directly affected the families of several members of the community. Normal services like the post are not currently running in Canberra due to the poor air quality, and key facilities (such as libraries and museums) are also shut with all the attendant changes to planned outings for our community members.

In Sydney, New South Wales, the Community feels truly blessed to say that the areas that our homes are in – have all been safe and have no news of any community members been affected. There is layer of smoke and also the smell in the air with poor air quality. The Community are working on a prayer gathering to remember those that had lost lives, their homes and their grieving families. We will take a donation from our community to the Rural Fire Service and details will be confirmed shortly. In other parts of New South Wales, people have died, homes and communities destroyed and wildlife and livestock killed.
At this stage in Brisbane, Queensland, the Community is fire free in and around Brisbane.  In Hobart, Tasmania, we are also fire free, we had a bushfire earlier in the week and we were fortunate that it rained that night which supported the fire fighters to control the blaze.

It’s good to know of the support and prayers from the wider L’Arche family. I would like to advise everyone that most Communities have a ‘bush fire plan’ and if we are asked to evacuate our homes, we have « grab and go » bags ready with key supplies should evacuations become necessary.

New year blessings to everyone,

Australie,
This site is registered on wpml.org as a development site.