Deepening understanding of hinduism and islam 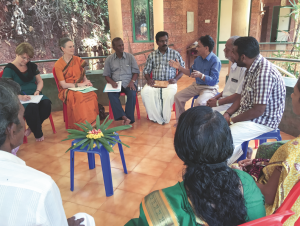 Sharing the questions of our world

It is no secret that faith is today playing an increasingly pivotal role in world affairs. Who, even a short time ago, would have predicted such a turn-around? Until recently, many particularly in the West have suggested that religion has passed its use-by date. Times change, and few today would suggest that religion or faith can be safely ignored.

But how does this touch L’Arche? Ever since L’Arche began in 1964 it has been a faith –based community. Planted in Christian soil in northern France, L’Arche quickly found itself responding to needs in India, to establish communities where Hindus and Muslims, with and without a disability, could share their lives together. So we have been dealing with issues around faith and belonging for around 50 years.

Today in L’Arche across the world, communities are composed of members with a wide variety of beliefs, outlooks and philosophies: an environment in which each person is seeking to find their place. This is, of course, not without its complications and problems. But, if community life with people gifted with a range of abilities and disabilities teaches us anything, it is that true unity does not come from pretending everyone is the same: on the contrary, even if two members come from the same faith, each is unique, each has a story to tell, and each story is worth listening to. For through good listening, we realize among other things that, as a community, L’Arche lives out at a micro- level the same questions that societies across the world are asking themselves at a macro-level: how to live together in harmony? How to give each person an honoured place? How to keep our identity, and grow with an open spirit? What exactly does it mean to be a community of faith, or rather many faiths and philosophies of life?

In order to listen to our experience across faiths, L’Arche International has set up a series of faith meetings separately with Islam and with Hinduism (such meetings with Christianity have been on-going for a long period). Aided by theologians, the aim is simply to reflect on how L’Arche can be lived in a Moslem or Hindu context, identifying the wisdom sources that will nourish and sustain the faith life of L’Arche members who belong to those traditions. “These meetings are at an early stage”, says Patrick Fontaine, International Leader of L’Arche, “but – who knows? – in a small way, they may help our world to feel more at ease with itself, and its own rich diversity.”